Daniel Boone Family Festival, Saturday May 7, will Dish up Food, Fun, Music and a Heapin’ Helpin’ of History

Free Community Event! 10 AM to 8 PM
On Saturday, May 7th, Historic Davie will host the Daniel Boone Family Festival in Historic Downtown Mocksville.  Featuring craftsmen, merchants, educational tours, historic reenactors, food, vendors, contests and live music, there’s something for everyone at the all-day event which kicks off at 10 AM. 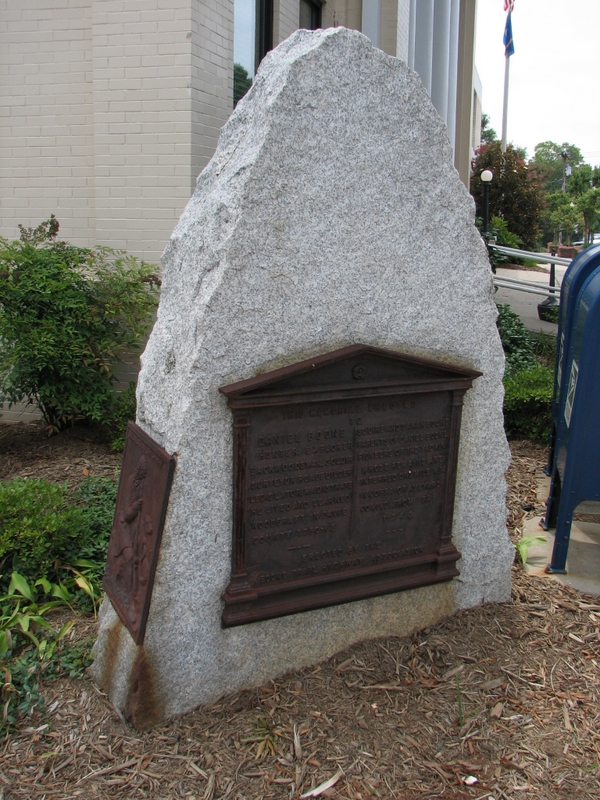 Retrace the Steps of Daniel Boone, the Revolutionary War, Historic Homes and More!
Daniel Boone spent nearly 25 years in the Yadkin Valley area, and two of the three tours revolve around landmarks associated with the Boone clan. The big attraction for Boone buffs are the tours that run at 10:15 AM, 12:30 PM, and again at 2:15 PM.  Tours are $5 and are provided by bus or van.

Tours include stops at historic Joppa Cemetery, where Daniel’s parents Squire and Sarah Boone and his brother Israel are buried (Israel’s grave is the oldest in the cemetery); the Boone Tract at Bear Creek, a 640-acre parcel of land granted to Squire Boone in 1753 and later sold to his son Daniel; the Daniel Boone Marker in Farmington; and nearby Pudding Ridge, where General Cornwallis crossed Dutchman Creek in pursuit of Nathanael Greene (Cornwallis named the area for the thick mud in the area his troops had to march through).

Another tour departing at 11:45 AM also visits Joppa Cemetery, Bear Creek, and the Boone Tract in addition to tours of the Jesse A. Clement House (built in 1828) and Historic Center Arbor, constructed as a site for “camp meetings” during the Third Great Awakening in 1876.

The last tour, which departs at 1:15 PM, takes visitors to the River Park at the Bull Hole; Veach’s Muster Ground; Revolutionary War hero Richmond Pearson‘s grave site; and the Historic Zachary Holt House and Village Museum of Cooleemee, both of which have exhibits centered around the area’s once-booming textile industry.

Rounding out the historic flavor of the festival will be the presence of reenactors from Fort Dobbs in Statesville.  Fort Dobbs re-enactors (Fort Dobbs was the site of a battle between settlers and Cherokee warriors in 1760.)

Frozen T-Shirt and Hula Hoop Contests with Prizes
Don’t miss the Frozen T-Shirt and Hula Hoop Contests at Junker’s Mill at 4 PM. These fun and hilarious events will have contestants pulling, stretching, whacking and otherwise abusing frozen t-shirts to see who can get theirs completely on first, and wildly gyrating to see who can keep their hoop spinning the longest. Registration on the day of the festival at Relay for Life Food Tent – $5 Fee.

All of the performances are free of charge. Evening performance only ~ there will be a $5 charge for wristbands for alcohol purchase.  Alcoholic beverages can be purchased at Junker’s Mill (no coolers please).

Additional Information
To learn more about the amenities and activities that will be on hand, head over to the official Daniel Boone Family Festival web site, or call 336-909-2263.

Jeanna Baxter White is a writer and the editor of the Davie County Blog. Relentlessly curious, she loves hearing and retelling the stories of Davie County. In her spare time, she enjoys spending time with family and friends or curling up with a good book.